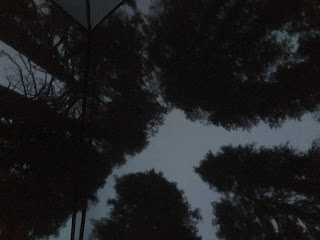 Up again at first light, I set my sights on a 7am departure time, figuring that with gravity on my side for the descent back to Road's End, I could do the 10.5 miles in an ambitious 5 hours.  It wouldn't be easy, though, because my tender ankle felt more sore and stiff than it did the previous morning.  Popping a few Advils for the pain, I started to break camp... after taking a few moments to appreciate my beautiful surroundings one last time.
That morning, I realized how wonderful it had been to fall asleep to the sound of a rushing stream... a constant, natural kind of white noise that had made it very easy to drift off, yet not obtrusive enough to wake me in the middle of the night.  Quite a contrast to my home in L.A., where I'm close enough to a freeway that I can be easily awakened by inconsiderate motorcyclists gunning their obnoxious engines at night.
I also saw three deer that morning as I was packing my gear, one running at full speed down the trail.  I envied its speed and agility, and wished I could make it back to Road's End as quickly as it could. 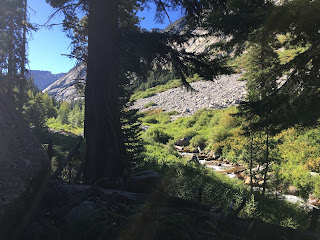 I hit the trail at 7:18, and for a long time, I was all alone.  Since the John Muir Trail had split off from the Rae Lakes Loop the previous afternoon, there weren't nearly as many campers on our trail anymore, and it seemed that most of them had stopped for the night at campsites they'd encountered before reaching mine.

But while I missed talking to people along the way, I was making pretty good time without the distractions.

For the first time in days, though, I did start thinking about the outside world.  How had the Cubs done while I was gone?  What would I want my homecoming meal to be that night?  How long would it take me to get to that fresh fruit stand I'd passed on Hwy. 180 on my way to Kings Canyon? 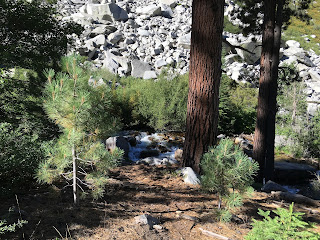 The trail itself wasn't too difficult.  Obviously, since I had about 3,000 feet of elevation to lose before reaching base, there was a lot more downhill than uphill.  There was one confusing moment a couple miles in, where the trail crossed a stream and seemed to disappear on the other side.  But after a minute's worth of exploring the area, I was able to find it again. 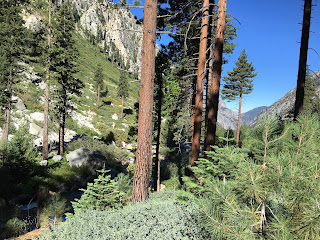 Because the trail was following Bubbs Creek, and never ventured more than a few hundred feet away from it, the scenery remained remarkably similar for the first 6 or 7 miles of the hike -- plenty of forest!  I was grateful that a fellow hiker I'd met on Day 3, Steve, had given me a spare bug net to wear, because that made a huge difference!  I knew bugs would be a problem on Day 5, and I'd been loathing the thought of sweat carrying insect repellent to my lips, as it had on Days 1 and 2.  Ugh... what a horrible taste! 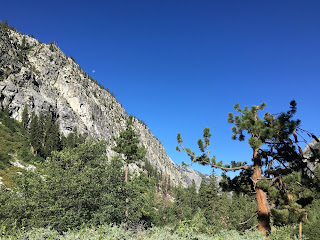 I was following the moon into the western sky as the trail continued, and I was making great time!  It was about 9:30, and I was already halfway to my destination.  I figured I would soon start encountering hikers who were on their way in from Road's End.

But first, I encountered another kind of trail inhabitant.  A much scarier kind.  I'd gotten used to the only sounds being the creek, my footsteps, and my breathing, so when I heard a strange, sudden rattling sound, I momentarily froze.  Where did that come from?  In a split second, I whipped my head around to my right... and just behind me, about 3 feet away, there was the rattlesnake.  Thank goodness it was behind, and not ahead.  Wanting to put as much distance between me and the rattler as quickly as I could, I scurried down the trail as fast as my legs would safely take me.

Sorry, I didn't stop to get a picture.  I know it would have been cool, but hey, not at the expense of a snake bite.

I did, however, find a photogenic blue-bellied reptile who was ready for his close-up, so this will have to do. 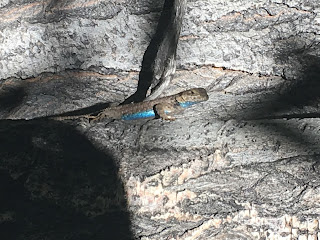 Within a quarter-mile of my snake sighting, I saw the first inbound hikers coming my way.  Of course, I warned them about the impending danger, because that's what people do out on the trails.  They look after each other.  Which is a very cool thing.

Shortly thereafter, I reached Sphinx Junction (you saw the sign at the top of the post), and I knew I was into the home stretch.

Why do they call it Sphinx Junction?  This picture might explain it... 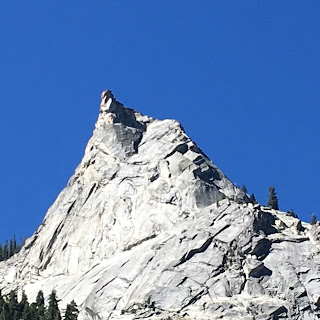 So, onward I went, further along the creek bed... 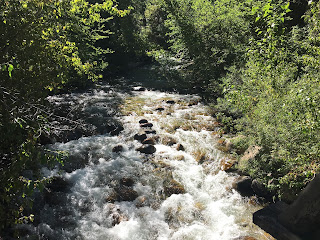 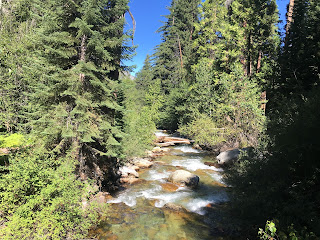 And then, the final descent began.  Within a mile, I had noticed the creek had fallen off to the left, and there I was, standing well above the valley's treeline. 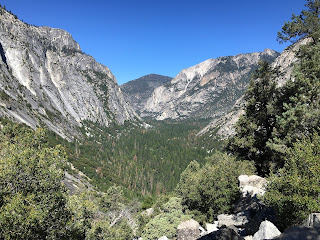 From there, a series of steep and narrow switchbacks took me down the side of the mountain.  With each one, I could feel the end of the journey drawing closer.  I knew that soon, I would get to the bridges that would take me over the Kings River and to the Paradise Valley Junction, where I would rejoin the section of trail that had taken me outbound some 45 miles and 98 hours earlier. 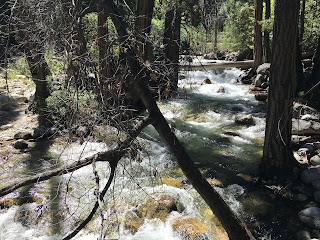 Crossing the river, I was back at 5000 feet, and the end was in sight.  By now, all of the day's backcountry campers were well into their journeys, so on the path back to Road's End, all I saw were fresh-faced day hikers in colorful T-shirts, unencumbered by big backpacks or gear.  And there I was... grizzled, sweaty, beaten down by mile after mile of terrain.

I was about to, though...
There was the Wilderness Permit Station.  And there was Ranger Chris.

Yes, I had.  It was 11:26am on Sunday, July 24, and this outdoors newbie had completed his first adventure.

Once I got to the car, I drove right to the store in Cedar Grove Village.  I wanted -- no, I needed -- some kind of junk food and a sugary drink.  Walking from the parking lot to the store felt weird.  My body had gotten so used to trekking with the weight of the backpack that I felt strangely off-balance and naked as I made my way into the building.

Those tortilla chips, yogurt-covered fruit bites, and iced tea sure tasted good.  And as I drove westbound on Hwy. 180 to leave the park, I set about answering some of those questions I had earlier.  It took an hour and 45 minutes to reach that fresh fruit stand -- and boy, was that fruit tasty.  The Cubs had won three out of four while I was gone.  And dinner would be a feast from Chilli Thai, one of my favorite neighborhood restaurants.

Funny... just as I felt I'd earned those views on the Rae Lakes Loop, I felt I'd truly earned that meal.  And it tasted even better because of that. 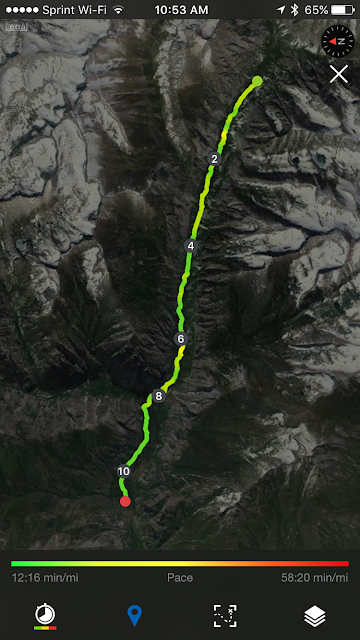