I woke up in a panic.  What time is it?  It feels like I've been asleep a long time.  Did I oversleep?  That's the last thing I wanted to do on Day 1 of my first adventure.


Well, I need not have worried.  It was 2:49am, a good two hours before I'd set my alarm.  I guess I was just really excited, because wouldn't you know it?  I couldn't get back to sleep.  So I got myself packed up and ready, and after taking advantage of the hotel's 5am breakfast buffet to have some fruit and waffles, I hit the road.

At the end of the two-hour drive, there was Ranger Chris at the wilderness permit station, playing a little banjo.  Some traveling music, if you will.  And so I set off on my hike.

The first couple miles weren't especially remarkable, just a pretty level walk through some forests and some clearings, with a few glimpses of the mountains towering off to either side.  But after the trail forked, everything changed.  The path began to ascend quickly, and the sandy gravel turned to rock.  And off to the right, the south fork of the Kings River was a constant companion, with the sound of rushing rapids and thunderous waterfalls.  Even when I couldn't see it, I knew it was there. 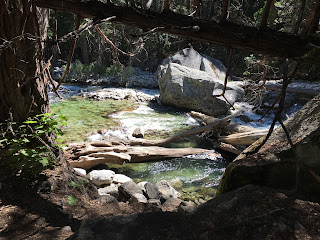 With the trail continuing to climb, the views just kept getting more and more awesome, especially once I'd gone over the treeline and could see just how vast these canyons are. 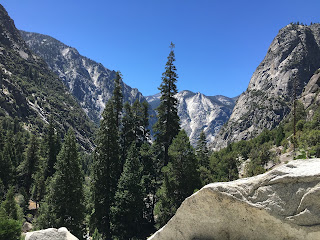 By the time I'd reached about 6000 feet (the trailhead was just over 5000'), I was starting to feel a little fatigued.  Not only is it difficult to climb at such a high altitude, but this was also the first time I was hiking with a 45- to 50-pound backpack attached to me.

(Newbie mistake:  It probably would have been a good idea to get a little practice walking with a fully loaded backpack, just to get a feel for it in a non-gameday situation.  But it's a little late for that now.)

So I started taking a few more breaks along the way, and rested for a good 10-15 minutes when I reached this cool, calm part of the river that even had some fish swimming in it. 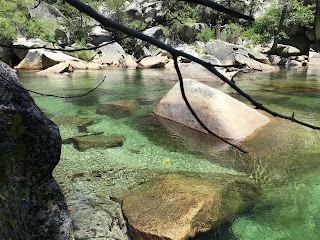 So nice, so relaxing... it really helped steady my nerves for the last part of the hike into Paradise Valley.  It was interesting, because once the river evened out, the vegetation started changing rapidly as well.  Where there had only been rocks and trees, I started to see some flowers, bushes, and soil.  It became pretty obvious that Paradise Valley was close, and when I ran into three CCC volunteers -- Emily, Cody, and Lani -- they confirmed I was getting close to the day's finish line.

Anxious to make camp, I stepped up my pace a bit, since I was no longer climbing at such a frantic rate.  Passed the Lower Paradise Valley campground, and soon arrived at Middle Paradise Valley, my destination.  I'm not going to lie -- it was a definite relief to make it there.  Between waking up too early, the long drive to Kings Canyon, the altitude, and the extra weight I'd been carrying, I was exhausted.  Once I set up my tent (which was easy, since at least I'd practiced that), I couldn't resist taking a well-deserved afternoon siesta.

I woke up well before sundown, but because the campground was nestled right alongside a mountain ridge to the west, it was completely engulfed in shadow.  That gave it kind of an eerie, drab, otherworldly effect. 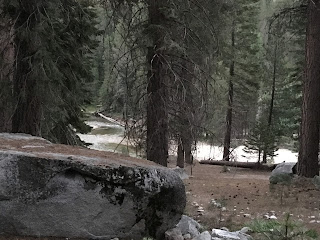 The campsite, although beautiful, was a little disappointing.  I heard a few other campers arrive at various times, but everybody kept to themselves.  I had my first experience with freeze-dried camping food, and realized that my utensils were missing.  Where'd they go?  I don't know.  But it didn't matter.  Basically, for the duration of the trip, I'd be slurping my meals out of their bags.  Not a technique that would win me any high society style points, but in the wilderness, it worked out just fine.

I went to bed exhausted, but content with my first day's effort.  And I have to say, I slept incredibly well that night. 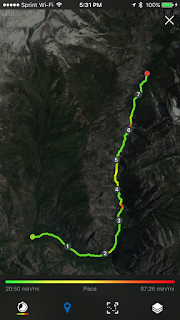