What a difference a day makes!  There was little danger of me oversleeping out in the wilderness; the sun takes care of that.  So when the sky lit up, I woke up, looked out my tent window, and this was the first thing I saw.
OK, it's hard to see at the blog video resolution (it'll be much clearer when I cut my YouTube videos), but there's a deer there, maybe 10 yards away from me.  Now that's a beautiful way to wake up.  Deer are such gentle, graceful beings, and seeing it gave me a great feeling about the day.

Since I'd pretty much emptied my entire backpack trying to find my missing utensils and had to repack from scratch, it took me a little longer than I'd hoped to get ready, but I was still ready to hit the trail by 8am.  Good thing, too, because it was a hotter day.  And it wasn't long before I was contending with a blazing sun. 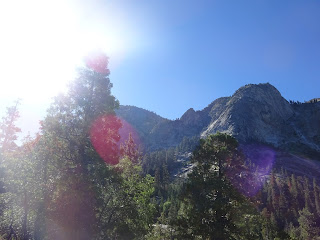 The trail wound north for nearly two miles before I reached the Upper Paradise Valley campsite, but it wasn't a particularly difficult hike -- a modest 150-foot elevation gain through the forest, with no switchbacks.  Once at the campsite, though, I saw that things would take a turn, both literally and figuratively. 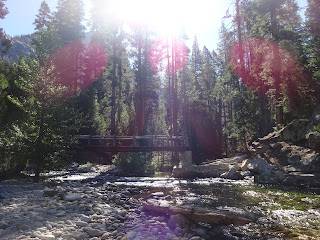 This bridge would take me over the Kings River and on to the next phase of the journey, heading eastbound along the trail of Woods Creek. 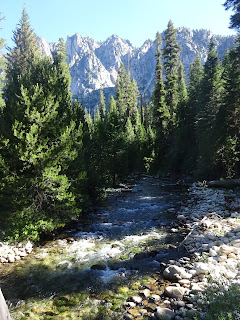 Soon, the steep switchbacks had me high above the creek bed, taking me above the treeline and giving me gorgeous views of the mountains and valley below. 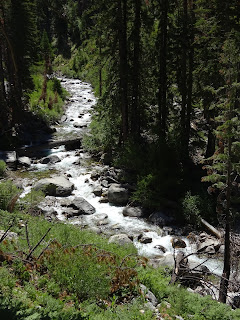 I continued along at a good pace, although I stopped for a while when I came across an unexpected stream.  Although I'd made it to camp on Day 1 with water to spare in my Camelbak, I didn't feel as confident about Day 2.  Not only was it hotter, but the increased altitude also felt a lot drier, so I found myself feeding my aqua addiction a lot more frequently.  So, I broke out the filter and pumped myself a fresh new supply of drinking water before moving on.

Shortly after that, the whole personality of the trail changed, and I found myself in a gorgeous meadow, where I once again started seeing more bushes and flowers than rocks. 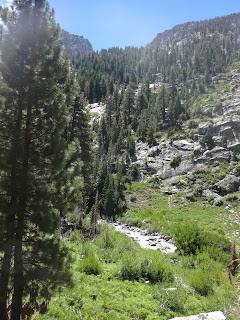 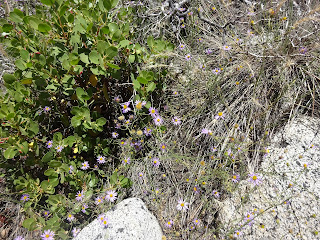 Oh, and lizards.  Saw a lot of lizards on Day 2.  Tried to find some who were photogenic (broke out my Taco Bell chihuahua "Here lizard, lizard!" more than a few times), but didn't have much luck.  They were all pretty skittish.

I meandered through the meadow, feeling pretty good and carefree.  Beautiful day, beautiful surroundings, and I was covering good ground without feeling too winded or overwhelmed.

And then, confusion struck!!!

I reached a point of the trail that was blocked off by a fence.  Huh???  What's going on here???  As a newbie, I knew nothing about drift fences.  And I didn't see any way through it, even when I went along the fence line for a bit.  After several minutes of trying to figure out what was going on, a couple caught up to me, and we all climbed over the fence using some adjacent rocks.  Though now, in hindsight, I realize that the fence was meant to be opened right there at the trail.  Live and learn, right?

Anyway, soon after that, I reached the point where the Rae Lakes Loop intersects with the John Muir Trail... and it was on to the suspension bridge that leads from the north side of Woods Creek to the south side, where the campground is situated. 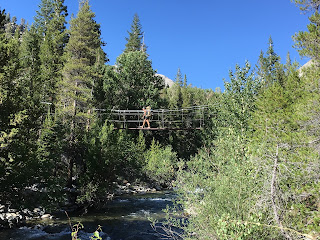 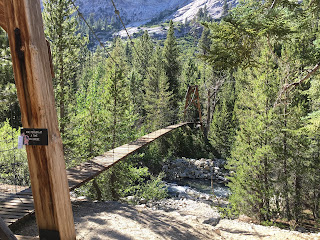 It's not the most stable-feeling bridge in the world, with the planks bobbing up and down and swaying side to side as I crossed, so it was a little nerve-wracking to walk it with my balance impaired by a huge, heavy backpack.  But I made it into camp, and set up for the night surrounded by some pretty glorious scenery.

As you can see, with no trees overhead, I decided to forego the rainfly for the night, so that I'd have a nice view of the stars as I drifted off to sleep.  But it wasn't particularly easy to fall asleep... because there was A BEAR SIGHTING!!!

When I came back from the river, where I'd been doing a bit of pumping and washing, there was a group of campers all gathered.  I went over to see what was going on, and that's when they told me a bear had just been there -- and actually, had explored the area where I'd pitched my tent!  But apparently, the bear had simply been on a scouting mission and didn't find anything worth fighting for, because he didn't return again that night.

Still, that made for kind of a nervous evening as the setting sun turned the mountain peaks a beautiful shade of red... 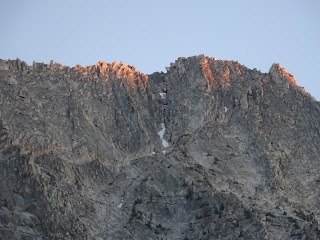 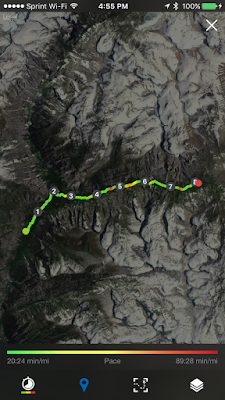