They say that ignorance is bliss.  I'm here to say they're wrong.

On paper, Day 4 didn't seem like it would be too bad.  Just three more miles of climbing, and then the downhill begins.  Three miles should be easy, right?  Especially first thing in the morning, when I'm at my strongest.  Right?  Right??? 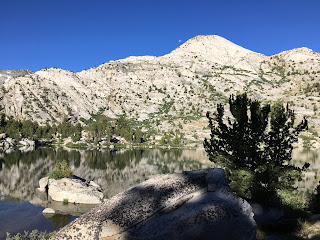 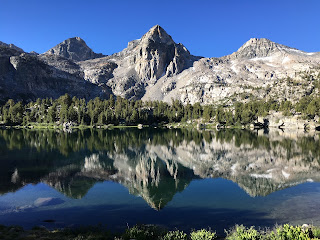 I was awakened at 5:30am by a symphony of squawking birds.  It was actually kind of comical to hear, because it sounded like an argument, and as I closed my eyes, I pictured Angry Birds up in the trees.

As I took my time getting ready to head out, I felt optimistic.  My right ankle was still tender, but no worse than it had been the previous morning, so at least I hadn't done any more damage.  So, as I watched the moon set behind the mountains and took a few final looks at gorgeous Middle Rae Lake, I left camp right at 8am. 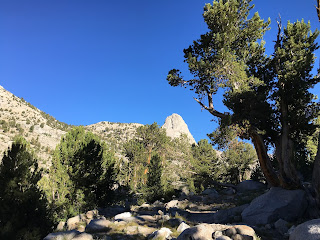 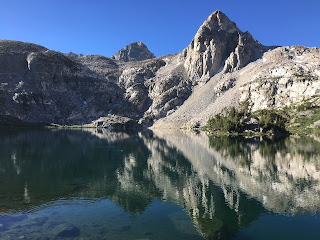 It all started innocently enough.  The first mile or so took me to the south end of Middle Rae Lake, then skirted the isthmus between Middle and Upper Rae Lakes.  Beautiful, flat, and relaxing... especially when I saw all the fish swimming around just off shore.  (The anglers weren't out yet, or they might not have been so carefree, haha!) 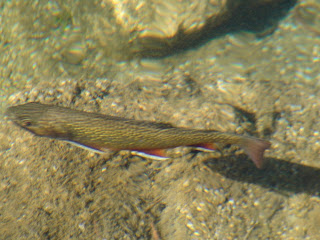 But once I put Upper Rae Lake in the proverbial rear-view mirror, things started changing very quickly.  A few switchbacks here, a few switchbacks there... I was climbing out of the lakes' valley, though the vegetation was still very lush and green.  It only seemed to take about 10 or 15 minutes before I was looking far down at the lakes whose shores I'd just walked. 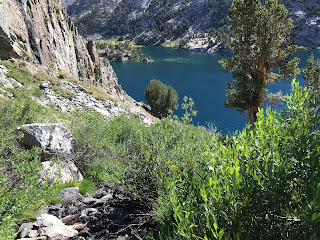 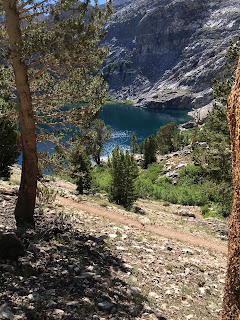 The further up I went, the more the vegetation thinned out, until it consisted mainly of grassy meadow along a few small streams carrying water down from the thinning snow pack.  This high up, and this close to the water source, the streams were crystal clear.  Even though I still had a pretty good amount of water left, I couldn't resist stopping to pump some of the stream water.  I figured it would be some of the purest water I'd ever tasted (and I was right!). 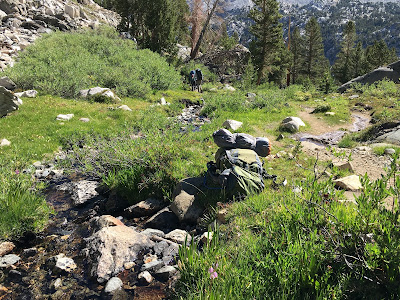 Though the climb had been pretty steep to this point, I was still feeling good by the time I reached the stream.  I could see what was ahead of me, though. 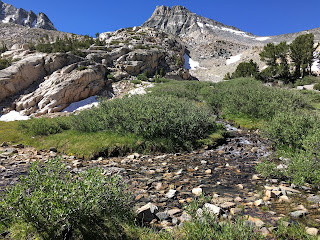 As I looked beyond the last remaining "green stream," I saw nothing but rocks and snow.  And a very steep incline.

Reaching the snowline, the elevation must have been 11,000 feet or higher, and I was starting to feel the effects of the elevation.  A sharp little headache behind my left eye.  A little bit of light-headedness.  A lot more huffing and puffing as I made my way up the trail.

I slowed things down significantly, stopping for frequent breaks to catch my breath.  The thought that kept running through my mind came from the flying lessons I took as a teenager:  FAA regulations state that you can't take an airplane over 12,000 feet unless it's pressurized, because the air is so thin at that altitude.  And I was nearly there. 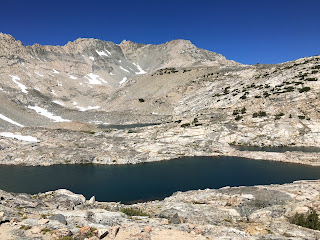 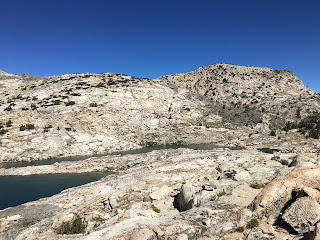 The view now looked like a lunar landscape (except for the water, of course).  Felt like it, too.  There wasn't much soil any more.  Instead, gravel crackled beneath my feet as I trekked toward a still-unseen summit.  How far did I have to go?  How much more could I take?  This last mile has to have been the most grueling I've ever walked in my life... and I still wasn't done yet! 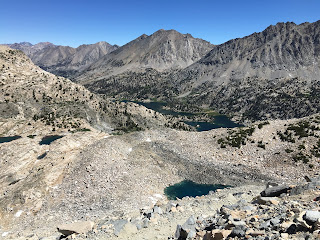 Then, I was hit with a series of switchbacks.  (No!  Not more of those!)  They were steep, they were rocky, they were narrow.  And for somebody weighted down by a backpack, hobbling on a tender ankle (by then, it was throbbing a bit), and feeling the intoxicating effects of altitude, they were a bit scary.  All it would take is one bad step...

I ascended slowly and carefully, taking regular breaks along the way.  A few other hikers passed me on the way up, but that was fine.  I was perfectly content to be the tortoise, not the hare, with my life on the line.  This was not the place to take any risks.

Finally, I saw them.  People standing atop Glen Pass!  I was still looking up at them, and they still seemed far away... but not too far!  The summit was within reach! 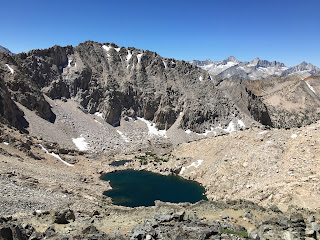 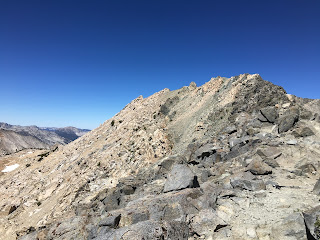 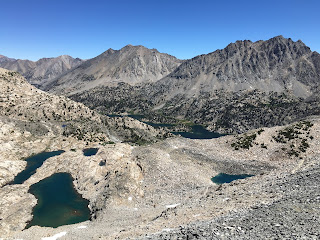 I reached the summit of Glen Pass shortly before 11:15am.  I made it!

Like everybody else up there, I took off my backpack and took in the view.  The pass is very narrow, and from it, you can not only look down at where you've been, but also where you're going.  And, I have to say, I felt a huge wave of relief seeing that my journey was, literally, all downhill from here.  From a starting point just above 5,000 feet, I was now a stone's throw away from 12,000 feet.  In three and a half days, I'd climbed nearly 7,000 feet!  And that's how far I'd be descending in the next day and a half.  It was a comforting thought.

Honestly, had I known exactly how challenging Glen Pass would be, I might have chosen a different first adventure.  The mountain threw its best at me.  It was tough.  It was torturous.  It had me questioning my sanity for a while.

But I did it.  I had risen to the challenge.  And it felt exhilarating.


I spent about 25 minutes up at the pass, drinking in the hard-earned scenery, then confidently embarked on the downhill portion of the journey. 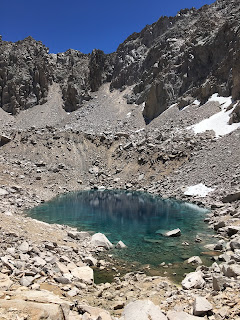 When you leave Glen Pass heading to the west, you go down a series of very steep switchbacks.  I was smiling the whole way down, but I certainly recognized the look on the faces of the hikers on their way up.  I tried to be as encouraging as I could, knowing they would soon possess the same smile.  :-D

After passing the beautiful blue lake you see above, the descent became more gradual and enjoyable.  The vegetation returned, just as it had disappeared on the way up.  Streams with grassy meadows, then more trees, and finally back into dense forest. 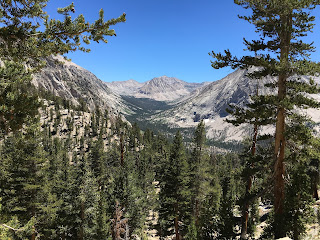 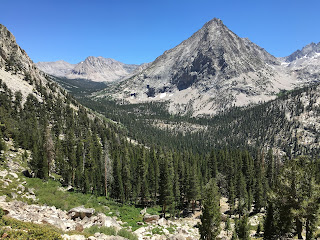 The day's voyage was far from over, but honestly, the rest of it felt a bit anticlimactic.  Yes, it was beautiful -- especially once the trail met up with Bubbs Creek near Vidette Meadow -- but after working myself to near exhaustion on the uphill, all I wanted to do was make it to camp and get some rest! 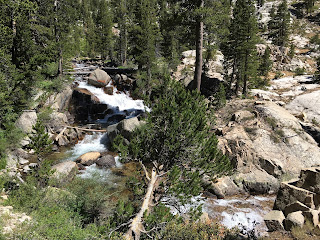 Of course, it wasn't that easy.  A couple friends I'd made back at camp, Turtle and Trailheart, had told me about a campsite that was supposed to be the best of the possible destinations that day, so I kept looking for what they'd described.  When I reached a campground at the very far end of Junction Meadow, I knew I had definitely passed it, so I backtracked, trying to find it.  I never did.  But, in doing that, and then heading back to the Junction Meadow campground, I added an extra 4 miles or so to my journey that day.  Just what I needed, right? 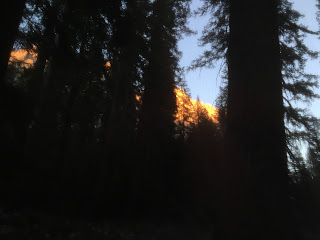 The mountains burned bright red at sunset, as I prepared to rest up for the final day of my adventure... the voyage home. 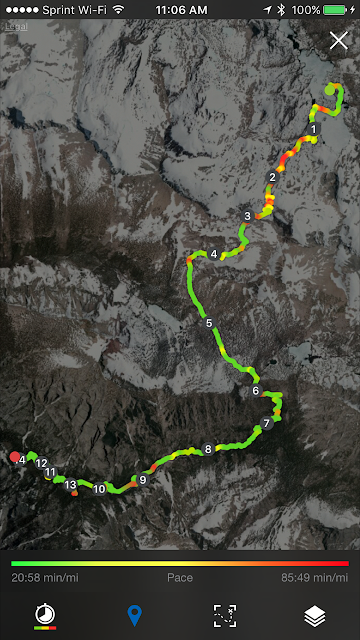